Overtaken 2 – Where They Are Now

Along with features of addiction and recovery specialists, including a medical doctor and municipal and advocacy leaders from Southern California, Overtaken 2 promises to be an insightful and inspiring look at addiction and sobriety. The short version is below, designed for classrooms and combined Overtaken-Overtaken 2 Presentations.

Jodi Barber has been on a crusade to combat the ongoing prescription pill epidemic ever since she lost her oldest son to an overdose. Hundreds of young adults and even kids have been swept up in the prescription drug epidemic across America, and in Orange County, the problem is especially heartbreaking. Prescription pill deaths have now eclipsed car accidents as the leading cause of death for teenagers, and Jodi knew it was time to act.

The original movie, Overtaken, was originally produced in 2010 by Jodi and Christine Brant in association with Ashley Media Productions (see trailer above). The movie has been distributed world-wide, starred in the Newport Beach Film Fest, and has been approved by schools across the country for classroom education.

Overtaken screening at the Newport Beach Film Festival in 2012

Prescription Drug Abuse is the #1 leading cause of death for teens in the U.S. 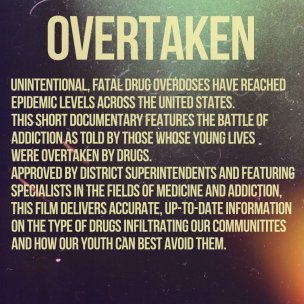